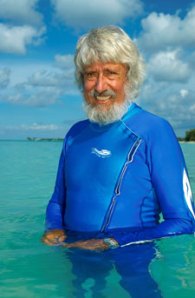 That was my big takeaway from watching Jean-Michel Cousteau’s presentation The Other 70%: Understanding the Earth’s Underwater Ecosystems on this 40th Anniversary of Earth Day. He spoke to a packed auditorium at Northwestern’s Pick Staiger Hall, sharing his life passion for ocean exploration and conservation.

He told the story of how he was first “thrown overboard” by his father at age 7, and how he now has his two children working alongside him to inspire and educate people around the world about the need to maintain a sustainable ocean.

Sharing multiple clips from his PBS/KQED series “Jean-Michel Cousteau Ocean Adventures“, he was able to illustrate with vivid imagery the beauty that lies in the depths. Through watching them, I understood how our actions were seriously endangering the existence of our wild turtles, sharks, birds and whales. I also learned about Jean-Michel’s role in influencing President Bush’s 2006 decision to designate the North Hawaiian Islands Marine National Monument to preserve 138,000 square miles of ocean.

But the clip that truly resonated with me was one which depicted 5 people across a spectrum of ages and diets getting tested for the presence of toxic substances in their bodies. The cameras were rolling as each person in the study was told the test results for the first time. The emotion captured on their faces was incredibly moving. You could totally see the shocking realization of how great an impact our environment and diet can have on our health. After the initial tears, came the renewed determination to protect and prevent others from suffering the same consequences.

And that, to me, was a step in the right direction following a higher level on understanding. Jacques was right. We can’t protect what we don’t yet understand. I’ve seen this ring true in my life too. The conscious lifestyle choices I make today are the result of me learning and gaining more knowledge about environmental and sustainable food issues. Knowledge is power, indeed.